Trying the technique Lori has used for the row along. These are just 1"finished size these litle squares and there's no way I'd have the patience to do them any other way. 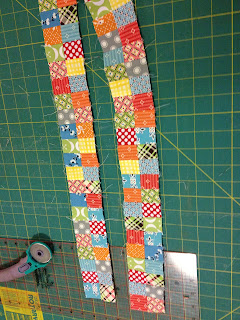 Michelle
Posted by Michelle at 5:19 AM No comments:

Thought I'd better hurry up and finish the baby quilt before it arrives. The top is finished just have to find some backing and quilt it quick. I can seee myself sewing the binding while in labour at this point! 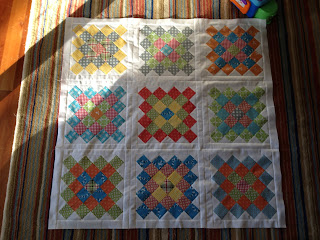 Not a great photo, this is the only patch of sun we have had all day, but the quilt turned out really cute. Also Lori from bee in my bonnet has started a row along, with one new row every 2 weeks, it looks really tempting. The first row has tiny four patch blocks made from larger squares it's really neat how they're made. Cheers
Michelle
Posted by Michelle at 11:50 PM No comments:

It's got to be one of the hardest things to do, name a child, and as I've already named a few the choices are getting harder. Now our last name throws a spanner in the works it's short, one syllable  and a hard sound and it just doesn't go with anything I like! With each child I have suggested we change our last name, that always goes down well...not.
So after a quick poll of most of the Mum's I know it seems that Dads aren't, as a rule, very helpful, well the weatherman is no exception he likes none of my names but won't offer any suggestions at all and with only a week or so to go I'm starting to worry we will have a child with no name.
Now my past adventures in baby names have not always gone well. Jordan was Jacob very deffinitely until he cried ,....and cried ....and cried only when we called him Jacob so we stopped which stopped the crying, yep I'm serious! and three days later finally called him Jordan But the ribbing by friends, family, nurses even the cleaner made those three days without a name unbearable and I do not want a repeat! Meg was different she arrived with a name, pity it sounds ridiculious with our last name, but we had two lovely girls names picked but when the weatherman held her up he announced those names are no good she's a Meg and so she is. Hayden's name was decided by Jordan, it was one of our choices but by the time he arrived Jordan had firmly determined that he was Hayden and there was no going back. Tulley I loved and knew it just had to be but when she was born the weatherman announced no she doesn't look like one to which I nearly flew off the bed and attacked him like a jack russell until he relented and said OK I guess she is but we'll put a E in it to make it more girly OK I was ready to compromise. So if you'd like to suggest something.......

The paralympics start today my TV watching has been saved for another 2 weeks. I think I enjoy the paralympics as much if not more than the olympics, the wheelchair basketball is awsome and the rugby is a blood sport, I just hope the coverage by the ABC is better than what channel 9 did for the olympics.
Happy viewing!
Michelle
Posted by Michelle at 2:59 PM No comments:

Yikes where did that time go. 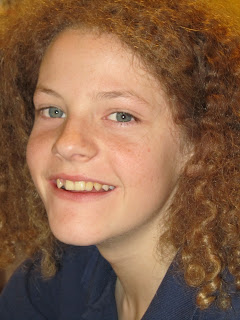 He's been reading his learners manual getting ready for his learners permit Aaaargh how am I going to survive this? Actually he's very sensible...usually...for a teenager, but I can't help worrying, at least a little bit.

Getting around to it

Everyone has those jobs you put off forever, I've been procrastinating about listing a pram on ebay for a good 12 months now, it sits in the dining room and gets shuffled out of the way and I'm always tripping over it to open the curtains in the morning, but there's always an excuse, I've never listed anything before, I don't have time to keep checking,I don't know how etc etc etc the list just goes on. So today I did it, really it only took about half an hour and now I feel good, it's done and I dont have to think about it till this time next week and by then I hope it's sold and I can get back into my dining room, coz that's important, it's where the quilting machine is and I need to finish the baby quilt! 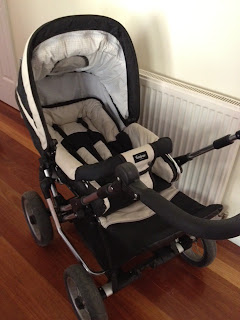 Michelle
Posted by Michelle at 8:20 PM No comments:

Bring back the olympics!

I'm having trouble re-adjusting to "normal" TV. There are some shows that I like but rarely do they play a new episode and even when the do it's replayed again the following night. The kids like Big Bang which is fine but I think I've seen most episodes at least threee times and they are starting to lose their punch. Also because of the flood of ads during the games for Big Brother they want to watch that too! Aaaaaarrrrrgh. Bring back something decent so I can resume plonking on the couch with my knitting.

Posted by Michelle at 4:48 AM No comments: 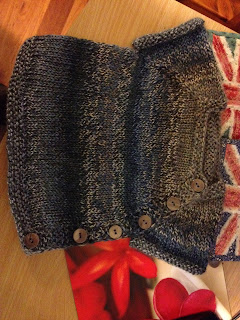 and the pattern for Foxy is also finished. ﻿ 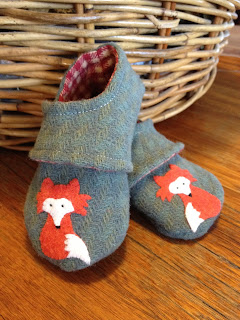 ﻿Not a bad days work.

Cheers
Michelle
Posted by Michelle at 2:24 AM No comments:

But dont worry today I'm sewing again, the aim is to finish a couple of patterns today so just a quick pic of the baby cardigan I've finished, it's just waiting for the buttons. This pattern is Puerperium by Kelly Brooker and you can find it on ravelry. It's my first cardigan/ jumper and I really happy with how it turned out. It has ended up a little bigger than I thought but that's fine because of the colours it will suit an older baby. 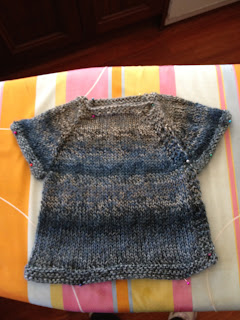 Cheers
Michelle
Posted by Michelle at 5:07 PM No comments:

Wow where did the time go, the more kids we have the faster they seem to grow up! She celebrated the big milestone in style, in her pink tutu, with a pink cake, see a theme happening here? and of course pink balloons. 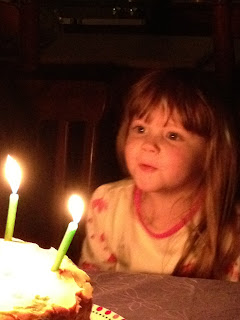 After my big whinge, so on to something much nicer. I showed the prototype grandpa slipper in the check now here's the real thing, Foxy Sox 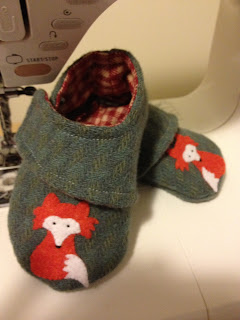 I'm still wondering wether to jazz them up with a button or not?
I've also nearly finished my next scarf, this is a feather and fan pattern from ravelry and really easy, I'm just never sure when to stop, is there a rule of thumb for the length of a scarf? 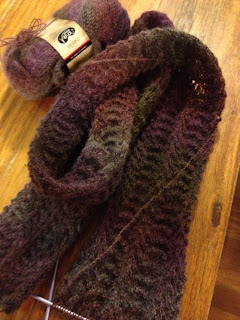 We had another scan today to make sure bubs is on track and the ultrasound lady found it funny that no we didnt want to know whether it's a boy or girl but can you tell us the length of the foot? Well I need to check if the booties I have made will be big enough! I'm happy to say all is going well bubs is about 5lb and it's foot is 6.5cm long. Have to make some bigger booties the smaller pair is just 7cm long, with 5-6 weeks still to go they could be a tad small.
Cheers
Michelle

I didnt think it would be this hard...

a) to find a pram that will still fit in my car and take 2 children
b) to get a second baby seat to fit and still be able to access the third row of seats
c) to find a sales person that understands what the heck I'm talking about
Ok I'm having a whinge again but it has just been the most frustrating time, from a sales girl who showed me two different prams that dissassembled into 47 different pieces and still didn't fit then showed me one that would but when I asked where the second seat went she replied öh no this is only for one" well duh I already have a pram that does that see it's right next to you with a child in it! To a mechanic who told me well you shouldn't need to access the third row of seats as they are only for occasional use and my child shouldn't use them on a regular basis, well thats fine but what do I say when the cops pull me over for having them strapped on the roof instead? No one seems to understand the concept of more than two children in a family.
Ahhh I feel better now.
Thanks for putting up with me.
Michelle

Promote Your Page Too

Michelle
I live in the Yarra Valley in Victoria with my hubby and our five kids, two dogs a cat and five feral chickens. I design and teach patchwork in my spare time, I also love my garden, especially the fruit trees and veggies.