I dont knit, I've tried and it just doesn't work. My Nan was a great knitter, even she gave up on me. I made it too tight and the wool would split and I hated the feeling of the yarn on my hands. Everything I tried gained and lost stitches at will, there was loops and holes and everything you can think of went wrong. But....it's finally got to me I'm sick of saying to everyone "no I can't knit" it's like revealing a dirty secret and because I sew and craft and embroider and make clothes and stuff people think I should be able to knit too.So I googled and found a pattern then I googled some more and learnt some stitches and now here's my first ever finished knitting project Ta Da! 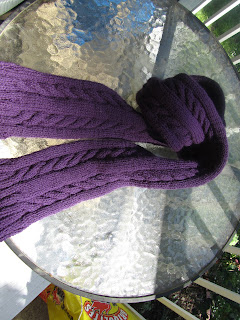 Well blogger has turned it on it's side but you get the idea, and it's finished! I'm being very disaplined with the knitting projects, especially as Spotlight had 40 percent off wool last weekend. Yes I did start something else but not until I had finished this one and I bought wool for just 1 more project, there will be NO stash! The next project is slightly more ambitious but I'm taking it slow and I found some really nice bamboo yarn so it doesn't catch on my hands. 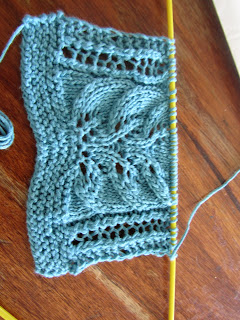 It's also on it's side, but you can see it's lacey and has a rather involved pattern but where's the challenge if I try some thing easy, and after this I'll have something I really love and I can say ÿes I can knit but I would rather sew" Now I just have to keep going till it's finished. Notice I haven't done anything with shaping, that's a bit too scary ! By the way the pattern is called Brooke's column of leaves scarf and can be found at www.brookenelson.com/leafscarfpattern.html there is also great you tube videos for all the rows, you can learn anything on the internet!
cheers
Michelle
Posted by Michelle at 11:21 PM No comments:

Email ThisBlogThis!Share to TwitterShare to FacebookShare to Pinterest
Labels: knitting

The garden has taken off and the growth and flowers are big enough to hide the weeds, it looks great, I was out taking some photos the other day. 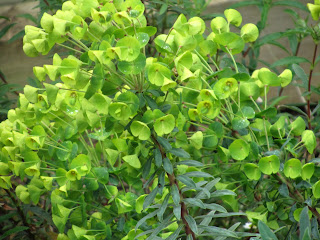 Euphorbias, I think I spelt that right 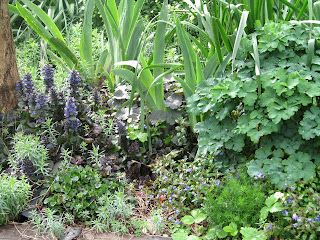 and look who else was enjoying the garden too. 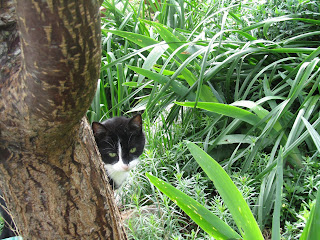 Cheers
Michelle
Posted by Michelle at 12:08 AM No comments:

Guess what I'm trying to do, yep decide on paint colours. I would love to say I'm going to paint my sewing studio which would sound great, but as my sewing machine is currently sitting on the kitchen table I'm really just painting the kitchen and family room and I will just have to dream about actually having a room of my own. 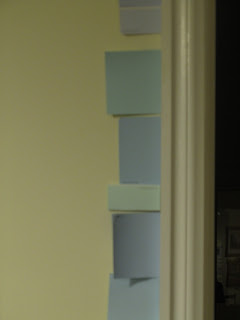 The colours haven't shown up very well but they are a range of light blue to aqua and at the moment the preference seems to be with the second from the top but half strength.
Tomorrow I'm hoping for a sunny day as I'm taking Mum over to see Karen's new shop, it's only small but it's full and it's so cute, then we're taking Tulley to Emerald Lake for a picnic. Hopefully we'll see Puffing Billy, Tulley loves Thomas the tank, if only Thomas clothes came in pink she'd be happy!

All Our Own Work

Today I've been at the All our own work quilt show for the Heathmont Baptist church with Karen from Mrs Martins. What a great local show with some wonderful ladies organizing it. It's on again tomorrow in Cuthbert St Heathmont, they have lovely soup and great sandwiches for lunch too, so if this Melbourne weather is getting to you or you've had enough of the football, head on down and say Hi!
Cheers
Michelle
Posted by Michelle at 2:50 AM No comments:

I know yesterday was officially the first day of spring but today the weather is up with the seasons, so happy Spring to everyone and I hope your weather is as nice as ours today. I picked up some violas at Safeway this morning and I'm heading out to put them in right now! 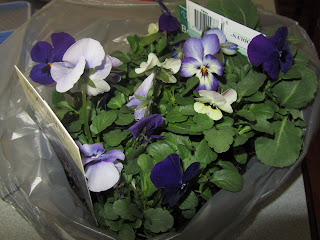 Posted by Michelle at 7:54 PM No comments:

I'm sure I say NO New Projects until I've finished at least one UFO or at least caught up on samples I need for classes, but I couldn't resist this quilt. I saw a similar raggy quilt in Spotlight the other day when I popped in to get numbers for the back of Hay's footy jumper, see I was there for a totally innocent reason. Well the one they had made was from a simplicity pattern and it was a butterfly and flannel quilts are soooo cuddly and their flannel was on special at $1.99! So I just thought I'd whip this up, should only take a couple of hours and I could have it made as a surprise for Meg when she got home from school.......well it took a little longer than expected, partly because I didn't buy the pattern and do it the easy way and then I decided she really is into owls at the moment so I should make one of those etc etc....anyway 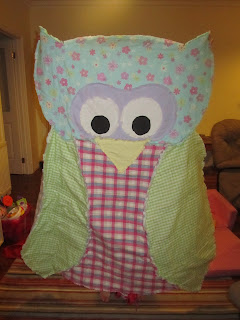 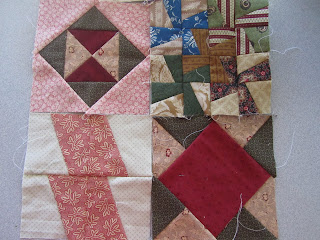 and this one in slightly different colours 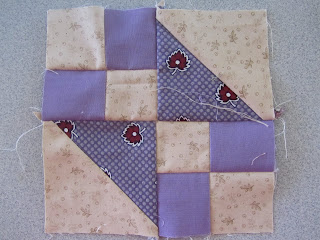 So now I dont feel as bad and there's one happy girl asleep under her new quilt tonight.

Posted by Michelle at 5:40 AM No comments:

Promote Your Page Too

Michelle
I live in the Yarra Valley in Victoria with my hubby and our five kids, two dogs a cat and five feral chickens. I design and teach patchwork in my spare time, I also love my garden, especially the fruit trees and veggies.